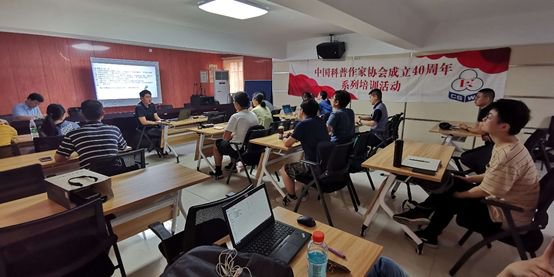 After the commencement of the ceremony, the trainees reported to the trainers on their own writing achievements in the past month. A total of 36 works were received during the training, including 32 science fiction works and 4 popular science works on marine science, space explorations, future fire control, artificial intelligence, logical reasoning, military sciences and scientific measurement, etc. Trainees who failed to arrive at the scene turned to remote oral defense.

For the common issues arising from writing, the trainer & science fiction writer Wang Yanzhong pointed out during the oral defence that science fiction works within 10,000 characters, due to their limited length, must refrain from being too complicated, otherwise they will be like putting the cart before the horse. The trainer Suo Hefu pointed out that writers had better tell stories within a limited length, and that a well-told story will turn into a successful writing. Everyone spoke highly of Tang Zhenfan’s science fiction novel on VR exploration, believing that he had brought out the underlying science fiction setting by means of reasoning, and that his novel would reach the publishing level should he continue to revise it. Cheng Zhongwei, a Changzhou-based science writer participating in the training course as a trainee, wrote a scientific fairy tale with autistic children as the prototype. The trainers gave their affirmation to him for his linking writing with practice.

Zhang Jie, Editor-in-chief of the Jiangsu Science Communication Center and Deputy secretary-general of the Jiangsu Science Writers Association, commented on the popular science works, “Excellent popular science displays strong humanistic care definitely. During the science writing process, one needs to not only select a good topic and ensure the scientific nature, but also highlight the awareness of humanistic care during the writing process. He also stressed that “storytelling” should be highlighted in science works. It is very interesting and attractive that Luan Haifeng popularized length and other units of measurement through fairy tales.

After the oral defense, the trainers issued course completion certificates to the trainees, hoping that they would continue to revise their works, participate in the writing competitions of the Young Science Star Initiative, and strive to achieve better results.