On August 22, 2018, the 2nd “Guangyao Cup” China Industrial Literary Works Competition was officially launched at the China Science and Technology Museum. The competition was hosted jointly by the Industrial Culture Development Center of the Ministry of Industry and Information Technology, the Writing Liaison Department of the China Writers Association, China Enterprise Confederation (CEC) - CEDA, and Guangdong Guangyao IOT Technology & Culture Co., Ltd., and co-organized by China Science Writers Association (CSWA). A total of nearly 100 leaders, experts, scholars, renowned writers and media representatives from the industry and the community of literature, film and television and media attended the launching ceremony. 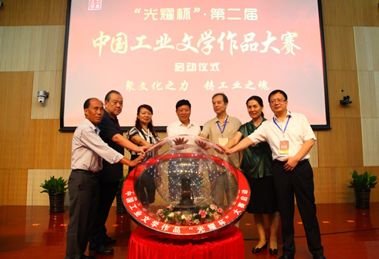 Venue of the launching ceremony

Guided by General-Secretary Xi Jinping’s thinking on socialism with Chinese characteristics in the new era, this competition implements the spirit of the 19th National Congress of CCP thoroughly. It aims to promote the prosperity and development of industrial literature comprehensively, and highlights the commemoration of the 40th anniversary of reform and opening up and 70th anniversary of the founding of PRC. Specifically, the competition, on the basis of carrying forward the core values of socialism within the industry coupled by the development strategies of manufacturing power and cyberpower and deep military-civilian integration, delves into the industrial culture connotations, and seeks positive roles in guiding, transmitting information, promoting writings and prospering the industry, etc.

In addition to such three literary genres as novels, scripts and reportage (7 categories) for the 1st competition, the Special Award for Science Works was established. Accordingly, the awards for 6 recommended works were added besides the 1st, 2nd and 3rd as well as the Internet popularity prizes. To date, there have been a total of over 100 awards for the 2nd competition, with a total sum of rewards exceeding 1.2 million yuan.

Currently, contributors can register and upload their works on the official website of the competition (www.gongyewenxue.com). The list of winners will be disclosed in next August.

The 1st China Industrial Literature Competition lasted half a year (August, 2017 to January, 2018). Due to its high starting point, wide scope and tremendous influences, it has garnered wide attention from all walks of life and their active participation, which actively promotes the development of the industrial literature and carrying forward of industrial culture.